Reasons to Not Delay Orthopedic Surgery 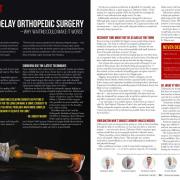 Reasons to NOT delay Orthopedic Surgery

Your knee has bothered you for years. You know you should have something done to it, but you don’t want to deal with the hassle of taking time off work for surgery and recovery. Or maybe your wrists ache so much they keep you up at night. You’ve tried a number of treatments, from cortisone shots to medications. But the pain is still there and you’re afraid of surgery.

There are many reasons people have for delaying orthopedic surgery — time, money and fear are just a few of them. However, having surgery sooner rather than later can often be the best option to get you living the best life you can and avoid future complications. Here are some reasons you shouldn’t delay orthopedic surgery any longer than necessary.

Your Quality of Life Will Improve

For some people, they’ve gotten so used to dealing with chronic pain that they don’t see any reason with going through surgery. They figure they’ve made it this far, why bother? The thing is, having the necessary surgery can drastically improve one’s quality of life. Dr. Michael Higgins, a hip and knee replacement surgeon at Tidewater Orthopaedics, often hears from patients who wish they had chosen surgery sooner. “Most (but not all) orthopedic surgery is done for quality of life,” Higgins says. “If you are suffering from an orthopedic problem, you owe it to yourself to become educated about all your treatment options and make an educated decision to improve your quality of life.” Dr. Nicholas Smerlis, a hand and wrist surgeon also at Tidewater Ortho, says he’s had patients with carpal tunnel syndrome — a tingling, numb or painful feeling caused by pressure on a nerve in the wrist — deal with years of poor sleep because they were constantly waking from pain. After surgery and being able to sleep through the night without a brace, they were amazed to realize how much they had been suffering.

Surgeons Use the Latest Techniques

From outpatient joint replacements to minimally invasive procedures, there probably has never been a better time to get orthopedic surgery. More can be done with an arthroscope than ever before, and joint replacements have made strides in terms of reliability and longevity. Carpal tunnel surgery that used to require casts and a hospital stay now is an outpatient procedure with no immobilization. Ankle replacement implants last longer than ever before. Infections are also far less likely in orthopedic surgery, helping to quell fears over contracting a hospital-acquired infection. Arthroscopic surgery itself has a less than 1 percent chance of infection, says Dr. Nicholas Sablan, a Tidewater Ortho surgeon who specializes in sports medicine and arthroscopic surgery of the shoulder, knee, elbow and hip. At facilities such as the CarePlex Orthopaedic Ambulatory Surgery Center (COASC) in Hampton, where Tidewater Ortho surgeons operate, the infection rate is below 0.0001 percent. Patients are largely shielded from infection because the center is dedicated to outpatient surgeries and everyone is screened beforehand to make sure they're in good health.

On the rare occasion an infection is identified, it’s treatable, says Dr. Jonathan Mason, a spine surgeon at Tidewater Ortho. “If the surgery is to improve quality of life, the benefits far outweigh the risks of a rare infection that might occur,” he says. Additionally, anesthesia methods have changed for the better. Although spine surgery requires anesthesia, many other orthopedic surgeries — such as carpal tunnel release, ACL repair and rotator cuff reconstruction — can be done with only pain blockers to numb the extremity being operated on.

Recovery Time Might Not Be As Bad As You Think

Recovery time is probably the biggest reason people delay surgery, Sablan says. The truth is, advances in surgical techniques have resulted in much easier recoveries for patients. “Because the vast majority of surgeries are done arthroscopically with small incisions, there is less pain and faster recovery,” he says. Surgeries that previously involved a hospital stay are now often done on an outpatient basis, so that patients can heal at home. Even hip and knee replacement patients are up on their feet the day of surgery. Fear of pain after surgery can often put people off surgery. In one study of 400 patients who described having preoperative fear, 77 percent said they feared postoperative pain most of all. But as surgery has evolved, so have methods of handling pain, and pain control is significantly better than it used to be, Higgins says. Higgins, along with his Tidewater Ortho colleagues, uses the Healthy Patient Model, which involves a general health screening before surgery and emphasizes mobility and independence afterward. If patients are healthy and medically prepared beforehand, they’re less likely to have complications. There probably will be some pain from surgery — it is surgery, after all — and recovery can be unpredictable. But those fears can often be mitigated by a surgeon who is careful to explain the process and offers reassurance when needed, J. Mason says. “I try and paint a very realistic picture of what they can expect,” adds Dr. Paul Maloof, Tidewater Ortho's foot and ankle surgeon. “Many orthopedic surgeries can take a while to recover from and I want my patients to be as informed as possible before they make their decision.”

Unless you’ve got an emergent issue going on, such as bones breaking through the skin or an infection, no one says you have to rush into surgery — not even your doctor. Tidewater Ortho's surgeons agree patients should first try non-surgical methods to alleviate issues. “Most procedures can be delayed so that conservative treatment can be attempted,” Maloof says. “This includes rest, activity moderation, immobilization, use of anti-inflammatory medications and physical therapy.” Most conditions can have a trial of conservative management — under a doctor’s care — to see how a patient responds. For example, while rotator cuff tears can’t heal on their own, partial and small tears can respond to treatment such as therapy and injections, Sablan says.

Oftentimes, physical therapy before surgery is beneficial because it helps put patients in a better position for successful recoveries, adds surgeon Dr. Robert Mason, an upper extremity specialist at Tidewater Ortho. With arthritic conditions, there are often less invasive or less-complex procedures that can be done if the problem is treated sooner than later. And if you have a chronic condition but don’t think surgery would help, you should at least get an orthopedic evaluation. “I would much rather see a person early and get them started with non-operative management before a condition gets too severe,” R. Mason says.

So, What If You Do Wait?

Ultimately, the decision whether to have surgery rests on the patient. But there are many factors to consider. In the case of a foot injury that involves a fracture, if you wait too long for treatment, the bones can heal in a crooked position. Even an ankle sprain not treated appropriately can lead to long-term pain and disability. “Sometimes delaying surgery or putting it off for too long can make a simple surgery to fix the initial problem a much more complex endeavor if delayed too long,” R. Mason says. Some repetitive-use conditions such as tendonitis can sometimes heal with symptomatic management, but for carpal tunnel syndrome, delaying surgery can lead to not only weakness in the hand, but also loss of sensation and progressive neurological loss. Persistent symptoms from trigger finger — when the tendon in a finger gets inflamed — can lead to permanent deformity. A rotator cuff tear can cause an injured tendon to retract, making the repair vastly more difficult and increasing the likelihood of re-rupture. The bottom line? If you’re tired of being in pain, see an orthopedic surgeon. Get evaluated and educate yourself as much as possible on the possibilities. You might just be glad you did. “Most people who don’t want to take the time to get things fixed initially often regret putting it off,” R. Mason adds. “Once they finally see the results of the surgery and the hard work they put in during the recovery, they realize it was worth their time.”

Never delay if You Have:

• Damage to your nerves or vessels

• Pain and weakness in the neck or arms, which can indicate spinal cord compression